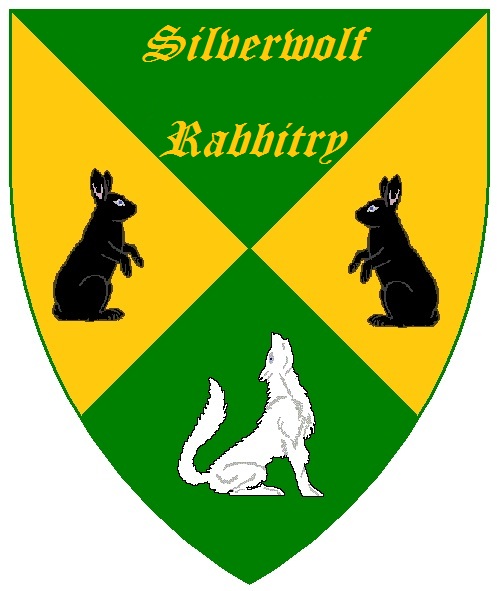 Silverwolf Rabbitry, Farm & Crafts
Our Website is Moving come find us at our new Site
www.silverwolfrabbitryfarm.com

The Silver is a very old breed of domestic rabbit, dating back to the 1500's.  Before the colonizing of the New World, the Silver grey was kept in rabbit warrens in England, possibly introduced there from Portugal by Sir Walter Raleigh.  Early to arrive on the American shores, the Silver was one of the original breeds to be recognized by the American Rabbit Breeders Association (then called the National Pet Stock Association) when it was founded in 1910. Today, the Silver is raised in the United States and the United Kingdom. In the United States they raise them in three varieties: black, brown, and fawn. In the United Kingdom they raise four varieties: black, brown, fawn, and blue.  The Silver is a fairly small rabbit, usually weighing 5-6 pounds when full grown.  The Silver has a unique athletic type and active disposition.  The name "Silver" comes from the silver-white hairs and hair-tips distributed evenly throughout the short snappy coat.

Silvers at the 2015 Spring National Show

The Standard Rex rabbit is a breed of rabbit developed in France in 1919. It is known for its unusually soft coat of fur. Currently, Rex Rabbits are most commonly kept for show rabbits, Fur & Meat.

Breeds we have raised in the past but no longer have.

The Argente rabbit is one of the oldest breeds of French show rabbits. The British Rabbit Council recognizes five colors of Argentes: Bleu, Brun, Creme, Champagne and Noir, while the American Rabbit Breeders Association recognizes only Crème, Champagne and NOW Brun. At birth, Argentes are of a solid color, with adult coloring beginning to show around four months of age.

Oops! This site has expired.

If you are the site owner, please renew your premium subscription or contact support.